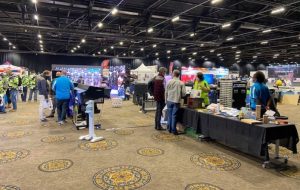 Exhibitors were impressed with the event:

‘On a whole it was very, very succesful three days,’ said Bradley Bate, Alliance Machinery. ‘We probably had in excess of 150 qualified leads at the show and the potential of 5 to 10 machines that we are negotiating at the moment, so it was very, very positive.’

‘It was quite a successful show – we achieved what we wanted to,’ said Gareth Fletcher, Kyocera. ‘The biggest thing was getting the exposure that we were after, which is really critical. We had some really cool customers and some important clients that came through and we generated some nice leads. We introduced our new flagship product to the public for the first time and we are really looking forward to the expo in September.’

‘It was more than great,’ said Stephen Graham, Ivyline Group. 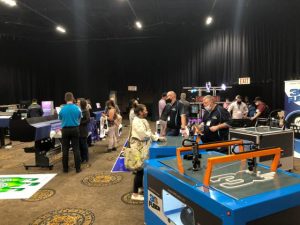 ‘Initially we were a little concerned about attending the show due to Covid,’ said Grant Potgieter, Fujifilm. ‘It has been an incredibly good show and we’ve had an incredible amount of visitor interest. It’s been a great opportunity for us to showcase our full offering, whereas historically we showcase our wide format division. We had the opportunity and that has proved very fruitful for us. I’m quite exited about the leads that we’ve generated and the potential sales that will come from them.’

‘I was very impressed with what the organisers did and how the event was marketed,’ said Eric Philpott, 3D Fusion.

‘Exposure is the most important thing that we got, as well as interaction with important clients,’ said Cassie Chikwiri, Stixo Signage Supplies.

‘The show was brilliant and the organisation was also quite good – there was no problem,’ said Keshav Sharma, Allrich. ‘I spoke to new people along with some sign companies and I got good leads.’

Calvin Guo, CNC PME, said the show was good and that the company got to see some old clients.

‘The show was very good and very successful – there were high quality customers,’ said Kevin Mc Ewan, China Direct Sourcing. ‘There are a lot of new businesses coming up – people who have lost their jobs through Covid are making a plan and being entrepreneurial, so they are all buying and looking around.’

‘The show was good. We had some good people coming in,’ said Benjamin Botha, iPlastics.

‘We had a lot of quality leads, a lot of equipment enquiries and a lot of start-ups coming through,’ said Liezle Barrie, Intamarket. ‘You see people that have been retrenched trying to start new businesses, so we saw a lot of that, and it was busier than we thought at times. It was a good show.’

‘There were lots of new faces – not the regular customers you’re used to seeing. The first and last day of the event were very, very good,’ said Pooven Pillay, Roland DG.

‘The show was successful and we really enjoyed it,’ said Enrico Marusi, Power Africa.

‘We’ve seen a lot of potential clients and there was really good interest at the show – people wanting to expand their businesses by buying new products,’ said Nardus Mouton, Gencotech.

‘I’m very impressed with the size of the show and the amount of people. I did not expect it to be this busy and I also did not expect there to be as many serious buyers as there were, so all in all it’s more impressive than what I was expecting,’ said Darryl Braithwaite, Midcomp.

‘We were pleasantly surprised regarding how many people actually visited the show and the interest in the specific machines,’ said Bernard Truter, Graphix Supply World. ‘We were concerned to a certain extent about the influence Covid would have had, but so far – we will see with the sales – the interest was been fairly high.’

‘We had a good show and we’re hoping to turn all the quotes into sales,’ said Naveen Rajcomar, Chemosol.

‘It all went well. It was a very nice exhibition and we got a couple of good leads,’ said Christo Schade, Sheetco. 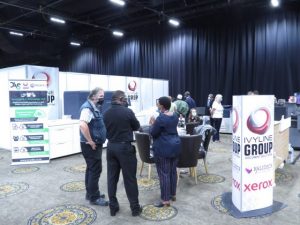 Judges visited each stand at the expo and judged the stands according to criteria based on design, staff friendliness and professionalism.

The results are as follows:

All the latest news all the time!

Make sure to visit AFRICAPRINT.COM – the news portal for all print industry news.

It’s so easy to get your news via WhatsApp:

We will never share your details with third parties. If you ever want to stop receiving updates, simply send us a WhatsApp with the message “STOP”.